It was another exciting start to the Caterham Motorsport Championship at Sepang on the weekend, with rookie Darren Brown winning not only two out of the three races, but winning his very first circuit race that he has competed in.

This was a busy weekend for Asian motorsport with the Asian Le Mans Series, TCR Malaysia, and the Asian F3 Winter Series all competing.

The 420R class unfortunately wasn’t a full grid, especially with last year’s champion Tan Pye Sen’s absence, and that of his main rival Arnaud Dupuis. But not taking anything away from the dominant drives in each race by CH Mac, who won all three races by gaps over 28 seconds from his brother CJ Mac.

Prem Pillay currently stands in third position in the championship standings, and has laid the foundations for challenging for a top three finish at the end of the season.

Once again it was the Supersport class that put on another nail-biting show with races two and three being  four-way fights for the wins, and rookie Darren Brown just scraping through to take both chequered flags by less than two-tenths.

Last year’s Supersport champion Peter Reynolds kicked off his 2019 campaign with a brand new, striking, matt silver with bright yellow racing stripe wrap. It looked fast, and proved even faster on the track.

And filling the rest of the Supersport field, from Sri Lanka, was Shirendra Lawrence and his son Yannick, who put in three strong performances and during Race Two took the lead several times.

Race Two had everyone’s eyes glued to the action as all four cars were within 0.800s within each other for the entire race, with the lead changing just about every third corner around the 5.5km Sepang International Circuit.

It has become an ever-increasing regularity to see the Supersports in multiple car battles and fighting three to four abreast around the fast bends, and this weekend was no exception, again proving that the Caterham Motorsport Championship is closest one-make racing in the region. 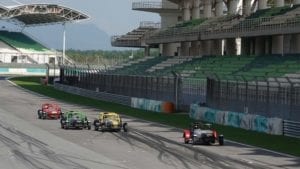 “This was an awesome weekend,” says a joyful Darren Brown. “And with all the practice I had before race weekend, I was happy to be on the pace and challenge for my first wins ever. The Caterham experience has been fantastic, and a big thanks to Campbell and the crew for making me feel comfortable and welcome, and also getting my car just right. This really was such an unbelievable first race weekend experience for me, and I look forward to the rest of the season.”

The second event of the season is not far away being April 20th, supporting the Malaysia Championship Series and joining the Asian Classic Car Challenge.

For full results and gallery of the weekend, please visit www.caterhammalaysia.com.