It was another action packed weekend for the final event of the 2019 Prince Lubricants Caterham Motorsport Championship, held at Sepang. 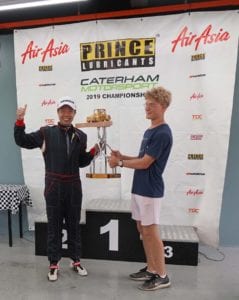 In his first full season of the championship, it was CH Mac who was crowned the 420R championship, ahead of his brother CJ Mac, and last years champion Tan Pye Sen.

The Supersport championship title was a lot closer, being fought for by Shirendra Lawrence, Darren Brown, and Peter Reynolds.
With a number of outcomes at play, the pressure was on both Shirendra to defend his place, and Darren to finish in the top two of both races. And it all came down to the final race 2 of the day.

Yet again, it was the Supersports that gave spectators nail-biting racing. With Mikko Nassi storming off at the front with two lights-to-flag victories for the day, that left the three title contenders to battle ahead.

And a fierce battle it was, with less than a second separating all three drivers for the whole of race 1. No driver was going to give way, with the lead of this three-car pack changing at least three times every lap.

With Shirendra having a major correction on the last turn and dropping him out of contention for second place, it was Darren and Peter bumper-bumper in the final stretch, with Darren clinching a must needed second place by only 0.252s. Mikko Nassi won with a lead of 37.349s. 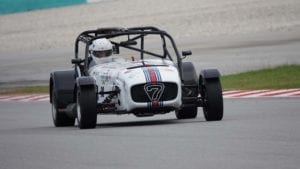 This second place would keep Darren in contention for the Supersport championship championship heading into the final race.

CH Mac was impressive again with a dominant win, a clear 24.668s ahead of new-comer Liam Lawrence, with Prem Pillay a close second, after only dropping one place from second on the grid.

CJ Mac rounded off the 420R class in fourth, while another Sri Lankan new-comer Andrew Choksy finished in fifth for the Supersport in his first ever race at Sepang.

The sky turned a very dark grey as we approached the final race of the season, and after a break in which the Supersport contenders calculated who could win the championship and how, the clouds slowly opened up with a light drizzle. 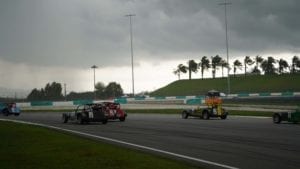 But a drizzle wasn’t going to stop the drivers as they lined up on the grid for the last time.

As the first lap finished, the rains descended hard upon the circuit, causing controlled mayhem on the track as the Supersports, with their better performing treaded tyres, got in amongst the struggling 420Rs.

It had been a while since the Caterham Motorsport Championship had a soaking race, and it was great to see all cars packed together battling it out.

All eyes were on Shirendra and Darren. Darren had to finish in at least second place, with Shirendra third or lower, in order for the Australian to be champion. It was neck-a-neck between the two drivers heading into lap three.

As cars were losing control and spinning on the straights, and driver visibility almost zero, unfortunately the stewards had no choice but to red flag the race after three laps.

When the commotion died down and the drivers made it back to the garage, it was Shirendra Lawrence who was crowned 2019 Supersport champion, after finishing in third place, only 3 seconds in front of Darren. With Mikko and Peter finishing first and second respectively in the Supersport class.

“It was quite nerve-wrecking heading into this weekend,” said a joyous Shirendra. “As Darren could have won the championship as well. But I am extremely happy to win my second championship, but a little disappointed that Darren and I couldn’t have fought in one more close battle on the track. He was certainly a great challenge, and again, racing this year was really fun.”

This is Shirendra’s second Supersport championhsip, having won the 2016 season.

And it was Liam Lawrence who put a stop to CH Mac’s winning dominance in the 420R class with an impressively controlled drive to the chequered flag. With CJ Mac securing the third step on the podium.

CH Mac was the standout driver of the year having won 7 out of the 9 races he competed in. A well deserved champion. “Racing this year was fantastic, and I very pleased to be crowned 420R champion, especially in my first year. Congratulations to Shirendra, and to all the other drivers who won races and fought hard this. I’m looking forward to defending my title in 2020.”

2019 marked the fifth Caterham Motorsport Championship with Campbell Tupling at the helm, “I would like to give a big thanks to our partners, mechanical and support staff, and also to the drivers for their support and giving us some of the most exciting racing to be seen at Sepang. We’re all looking forward to 2020 and more nail-biting racing!”