The final event of the 2018 Caterham Motorsport Championship got underway on Saturday at the Sepang International Circuit as part of the Malaysia Speed Festival (MSF). 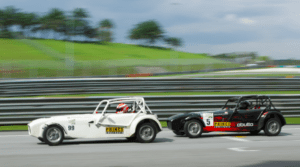 “It’s great to see another strong field of drivers this weekend,” said Caterham Motorsport Championship CEO Campbell Tuppling. “This season has yet again proven that the Caterham 7 is one of the most exciting cars to race in Malaysia. We had the pleasure of racing in Chennai, India this year and we aim to include another international event in 2019. A big congratulation to both our champions Tan Pye Sen and Peter Reynolds. It’s been excitingly close racing all year and we look forward to a bigger 2019.”

In his very first Caterham race, newcomer CH Mac secured pole position on Saturday morning in the 420R class, closely followed by another newcomer from the UK, Lee Torrie. 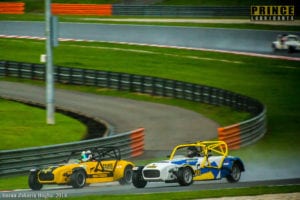 Both drivers stormed off the grid in Race 1 and after many attempts to get past CH, Lee Torrie had to settle in a comfortable second position, as CH Mac built a gap of 7 seconds at the front of the field.

After a long break from racing this year, multiple race winner Ivan Petev made the perfect start off the grid in the Supersport class, splitting Sidqi Ahmed and Peter Reynolds.

This would set the scene for the battle of the Supersport class, with all three drivers exchanging places for the whole race. Sidqi and Ivan drove a great defensive race, blocking Peter for several laps until with four laps to go, Supersport champion Peter Reynolds makes a daring dive on the inside of Turn 1 to take the lead.

With rookie CH Mac in the clear lead of the 420R class and securing the win ahead of Lee Torrie and Paul Ng, It was a super close battle for the Supersport win between Ivan and Peter, with Peter using his Turn 15 experience to time his entry and exit of the final corner to perfection and just pipping Ivan Petev by an amazing 0.030s for the chequered flag. 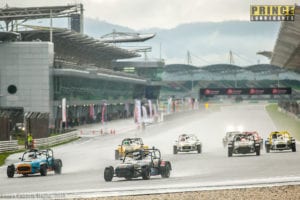 As usual during this time of year, the heavens opened and unleashed some rain in the lead up to the race, meaning we had a wet track at 6pm for Race 2.

This made the race more exciting as the wet track reduced the lap times of the 420Rs, enabling the Supersports to keep up to speed with the front runners.

Turns 1 and 2 was busy with all cars reaching the apex at the same and the two Supersports of Ivan and Peter had made their way into the lead pack, taking on the 420Rs of CH Mac, Lee Torrie and Paul Ng. At one stage Peter Reynolds was the overall leader for a couple of laps!

From halfway of the race it was CH Mac who had a spin early in the race, came back again and clinched a dominant win in the 420R class after his rival Lee Torrie had a spin at Turn 10, sending him further down the field. 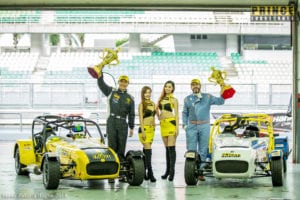 The pack was bunched up for most of the race with an exciting battle between all Supersport drivers. But it was Peter and Ivan who drove an impressive race, splitting the 420Rs of CH Mac and Lee Torrie, and finishing second and third overall. This was the first time the Supersports finished so high up, beating some of the 420R machines.

Speaking of his first championship win in his first full season of racing, Peter Reynolds: “I’ve loved my first year racing Caterhams here in Asia. It’s been a terrific season. The little car has been consistently well maintained by the great team behind-the-scenes. The racing has been thrilling, competitive, but fair. And the beers after with my fellow drivers all the more refreshing for it. I can’t wait for 2019.”

Winning his second Caterham Motorsport Championship, local hero Tan Pye Sen had a season of mixed results but was still pulled through. “I would like to express my immense gratitude to Arnaud Dupuis for pushing me all the way this season, and for being such a passionate and quick driver. We will have more battles in 2019 for sure! After starting off the season well, I ended 2018 without an engine. Hopefully, Campbell and his team can get my car repaired in time for me to defend my title in 2019, which is shaping up to be a very competitive season with new drivers coming onto the grid. The Caterham Championship remains the best value and most exciting racing in Asia bar none. Can’t wait for 2019!”

It’s been another great year of racing and camaraderie for the Caterham Motorsport Championship, and 2019 is shaping up to be a stronger grid with more hungry drivers wanting to prove themselves. The full calendar will be released shortly and we thank everyone for their support.