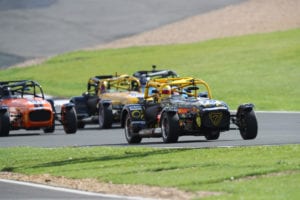 Created in partnership with the British Racing and Sports Car Club (BRSCC), the unique race format will see a mix of drivers from Roadsport, 270R and 310R become teammates and race their own cars in  ‘Super Teams’.

To ensure a level playing field on the race track, the ‘Super Teams’ must meet a specific driver grading total determined by their positions from the past championships. In team selection, if a driver is a frequent podium winner, they must pair themselves with a driver from the other end of the grid and a mid-grid finisher.

Caterham Motorsport Team Enduro will take to the world-renowned Silverstone National circuit with each driver having a maximum session time of thirty minutes, alongside a minimum track-time limit to ensure all team members have an equal part to play in the final results.

Simon Lambert, Chief Motorsport and Technical Officer at Caterham Motorsport, said: “While there are other multi-class race events out there this will be the first that sees different class cars come together to race in a relay style race. It’s an exciting opportunity for our drivers to take part and warm-up ahead of another year of exciting racing while getting to know those taking part in other championships.”

For further information and an entry form please email BRSCC via dominic@brscc.co.uk

The Caterham Motorsport Team Enduro event will be supported by BRSCC races for saloon and sports cars, giving drivers an excellent opportunity for a competitive pre-season shakedown in two 15-miunte races.  More details and entry forms will be available from the BRSCC office.